The voicemail was brief and to the point: “Georgs, you must come and sample the new cheese from Pieter.”

The caller was Tammy Miller at Country Cheese in Ajax, my neighbourhood cheesemonger in Durham outside Toronto. I stopped by a few days later, and right away sent an email to Pieter van Oudenaren at Mariposa Dairy in Lindsay, Ontario:

“Wow, Pieter, Thea is a stunner! Tell me more so I can spread the word to Canadian cheese lovers.”

To the point, Thea is an outstanding bandaged cheddar made with Ontario sheep’s milk by the Lenberg Farms Classic Reserve division of Mariposa Dairy where Pieter has had a hand in developing aged cheese like Lindsay Bandaged Goat Cheddar and Tania Toscano Sheep Cheese over the last nine years.

Hand-crafted in small batches using premium sheep’s milk from Miklin Farms near Georgina, Thea Bandaged Cheddar is made in the old world way by wrapping the cheddar wheel with cheesecloth which helps to age the cheese and preserve the flavour.

Aged nine months in a humidity-controlled aging room, the cheese yields a woody and buttery aroma, a sharp nutty profile with subtle caramel undertones. It has the sought after crystallization of a well-aged cheddar with a firm but creamy texture.

As Roxanne Renwick, a cheese specialist in Toronto, puts it: “Thea is rich and creamy yet full of tyrosine crystals. Sweet, salty and slightly tangy.”

The name Thea (along with the names Luuk, Taavi and Zander of truckles made at Mariposa Dairy) is a common Dutch name. It reflects the Dutch heritage of the VandenBerg family, Mariposa founders and owners, and the Dutch reputation for great cheese.

Cheesemaker Pieter van Oudenaren was born and raised in Bobcaygeon, a short drive from Lindsay. His parents emigrated from the Netherlands in the 1950s. The family name comes from Oudenaarde, a Flemish city in Belgium. Pieter’s father, Harry van Oudenaren, who is turning 95 this month, owned and operated an auto repair garage in Bobcaygeon for many years. Pieter took over the business and operated it for 27 years before the cheesemaking bug took hold nine years ago.

Since then, it has been one award after another for Lenberg Farms cheeses, including Grand Champion honours for Thea at this week’s Royal Agricultural Winter Fair in Toronto. 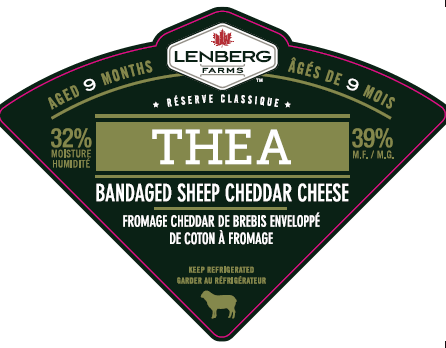 “What’s your secret in making such fabulous cheese?” we asked Pieter.

“A secret is a secret. In the words of Monty Python, ‘Blessed are the cheesemakers.’ I have been blessed with a great company and owners to work for and with. Good components, co-workers, a wife that supports and prompts me, and consultants that have helped me along the way to help me to tweak the recipes.”

Pieter describes himself as a learner: In recent years, he’s learned to sail a boat, drive a horse and carriage, and make maple syrup, in addition to making award-winning cheese.

He and his wife, Grace, who is executive secretary at Mariposa, have two daughters.

Miklin Farms in Georgina is owned by Mike and Linda Thompson and operated with their children, Anna, Laura and Joe. The Thompsons have been farming sheep for 29 years. They currently have 1,000 breeding/milking ewes, milking 500 at a time year round. The breed of sheep is Rideau crossed with East Friesian.

Thea is hand-made in relatively small quantities and thus is in limited distribution. Here are cheese retailers in Ontario that carry Thea:

Ask your cheesemonger to order Thea if she doesn’t carry it.