How many Canadian Grand Prix finalists have you tasted?

Cheesemakers from British Columbia to Prince Edward Island submitted a record 225 cheeses in 19 different categories in the 2013 Canadian Cheese Grand Prix, this country’s most prestigious cheese competition sponsored by Dairy Farmers of Canada.

A jury of eight cheese experts gathered in Montreal for a closed-door session a week ago to select 58 finalists that exemplify the world-class cheese being produced in Canada. Two cheesemakers—Fromagerie du Presbytère of Québec and Sylvan Star Cheese of Alberta—dominated the finalists with six selections each.

The 2013 Grand Champion and category champions will be unveiled at the Canadian Cheese Grand Prix Gala of Champions in Montreal on April 18. The competition is restricted to cheese made with cow’s milk.

The first time many of the winners will be available for tasting and purchase by the public in one place will be at the third annual Great Canadian Cheese Festival on June 1-2 in Picton in Ontario’s Prince Edward County.

Here are the 2013 Canadian Cheese Grand Prix finalists, with cheese shown left to right in order of listing: 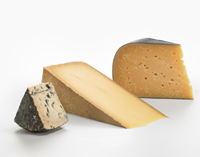 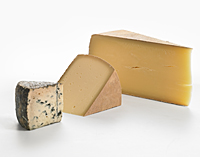 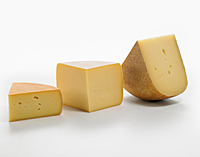 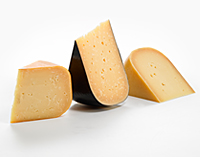 BLUE CHEESE (VARIOUS RINDS, WITH OR WITHOUT VEINING) 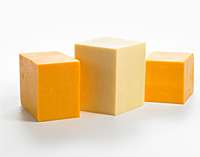 *Four finalists were elected in this category due to a tie between two scores. 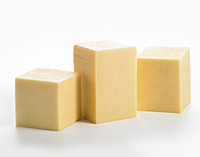 OLD CHEDDAR (AGED FROM 9 MONTHS TO A YEAR)

AGED CHEDDAR (MORE THAN 1 YEAR UP TO 3 YEARS) 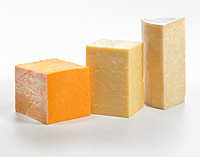 The Canadian Cheese Grand Prix is sponsored and hosted every two years by Dairy Farmers of Canada, celebrating the high quality, versatility and great taste of Canadian cheese made from 100% Canadian cow’s milk.

“Canadian cheese makers from coast-to-coast are producing top quality, impressive cheeses,” said Phil Bélanger, Canadian Cheese Grand Prix jury chairman. “The diversity we saw within the 19 categories really showcases how evolved this craft has become in Canada. From aged Cheddars to organic cheeses, cheesemakers from across Canada are taking it to the next level and are the envy of other cheesemaking nations.”

The jury members had the envious challenge of tasting all 225 cheeses and naming three finalists in each category. Tasting began with the milder cheeses and progressed to the more full-bodied varieties. Jury members carefully observed, touched, smelled, and tasted each cheese and evaluated them based on very specific criteria including flavour, texture and body, colour, appearance, and salt content.

The Canadian Cheese Grand Prix began in 1998 to promote achievement and innovation in cheesemaking and to increase appreciation for fine quality Canadian cheese. The competition celebrates the proud tradition of the diverse cheeses made in Canada with cow’s milk ranging from Gouda to Blue cheese.

All eligible cheeses must be produced in Canada, bear the 100% Canadian Milk symbol on their packaging and be available for purchase at retail.

Tasting 225 cheeses over two days for a noble cause

Somebody had to do it, taste 225 cheeses over two days.

That was the task facing the eight judges gathered in Montreal over Saturday and Sunday to taste their way through the 225 cheeses entered in the 2013 Canadian Cheese Grand Prix, the bi-annual competition that decides the best in cow’s milk cheese made in Canada.

Finalists will be revealed on February 26 with the winners announced on April 18. CheeseLover.ca will post the results the same day.

The first time most of the winners will be available for tasting and purchase by the public in one place will be at the third annual Great Canadian Cheese Festival on June 1-2 in Picton in Ontario’s Prince Edward County, just across the Bay of Quinte from Belleville.

Meet the eight judges who gave their all for a noble cause (in the photo, from left to right):

Sue Riedl: A Toronto-based food writer who is the cheese columnist for The Globe and Mail and also hosts its “Chef Basics” video series. She’s a regular contributor to foodnetwork.ca and writes for her blog (cheeseandtoast.com) about cheese and other edibles. Sue studied at Queen’s University before obtaining her cuisine certificate at the Cordon Bleu in London, England. She has worked in Toronto’s dining industry and has graduated from Canada’s Cheese Education Guild. Click here for her blog on the judging.

Michael Howell: Executive Chef of Tempestuous Culinary in Wolfville, Nova Scotia, cookbook author, leader of Slow Food Nova Scotia, President of The Restaurant Association of Nova Scotia and sits on the Board of Taste of Nova Scotia. Michael is a strident advocate for local food, family farms and new farmers. Click here for his Facebook post on the judging.

Allison Spurrell: Owner of the cheese boutique Les Amis du Fromage and the cheese-inspired restaurant Au Petit Chavignol in Vancouver.  Allison holds a certificate in cheese making technology from the University of Guelph and was inducted into the Guilde Internationale des Fromagers – Confrérie de Saint-Uguzon. Allison has been a member of the CCGP jury since 2006.

Gurth Pretty: Former president and owner of Cheese of Canada, Gurth is a true cheese lover and connoisseur. He was a jury member in the 2009 and 2011 CCGP events, and was invited to be a judge at the 2011 American Cheese Society competition. Chef and author of several books on cheese, he works passionately to have more delicious cheese be made available to Canadian consumers. He’s currently a Senior Category Manager of deli cheese for Loblaw Companies Ltd. Click here for his photos of the judging.

Danny St Pierre: After graduating from l’École Hôtelière de Laval cooking school, Danny rose through the world of cuisine including advanced-level training at the Institut de Tourisme et d’Hôtellerie du Québec in 1998 and two years at the world-renowned Toqué restaurant in Montreal, where he earned his stripes as a chef. Danny also served as host of the Ma Caravane au Canada TV show that aired on TV5 Monde. He is the owner of Auguste restaurant in Sherbrooke, Quebec and co-owner of Chez Augustine, a new café and caterer that celebrates home cooking for both eating in or taking out.

Reg Hendrickson: Reg has 40 years of experience in the food industry including teaching professional culinary programs in the Calgary public school system. He has a 20-year working relationship with Dairy Farmers of Canada and was responsible for the research and development of its initial cheese training material. He provides training for deli staff, and delivers cheese seminars especially geared to the needs of food industry professionals and the interests of the general public.

Ian Picard: Vice-President of La Fromagerie Hamel, one of Quebec’s finest and highly reputed cheese shops. Ian studied everything there is to learn about cheese at the École Nationale d’Industrie Laitière et des Biotechnologies in Poligny, France. He has worked with some of the most renowned master cheese makers in Paris, Dijon and Alsace to perfect his technique.

Phil Bélanger: Jury Chairman and the longest-standing jury member. Phil’s been a part of the CCGP since its inception in 1998. He has had a distinguished career to the Atlantic agrifood industry and currently is Senior Consultant for Post-Secondary Education, Training and Labour for the province of New Brunswick and Chairman of La Confrérie de la Chaîne des Rôtisseurs for the New Brunswick chapter, as well as an independent consultant in hospitality and tourism.

Earlybird ticket sales for The Great Canadian Cheese Festival are under way.

Cheese lovers have expressed strong support for Prince Edward County as the ideal venue for The Great Canadian Cheese Festival.

“Needless to say, there is no change in our commitment to produce Canada’s only annual celebration of artisan cheese in an appealing small-town, out-in-the-country setting that has been the Festival’s home since its inception,” says Georgs Kolesnikovs, event founder and director.

The third annual Great Canadian Cheese Festival will take place June 1-2 in Crystal Palace on the Prince Edward Fairgrounds in Picton, in the heart of Prince Edward County, Ontario. Cheese tours and a cooking class will be offered on Friday, May 31.

Earlybird ticket sales are under way at at www.cheesefestival.ca.

“Prince Edward County is an appealing destination for cheese and food lovers for many reasons,” says Kolesnikovs. “The awesome array of wineries is a huge draw. The range of artisan food producers is quite impressive for such a small region.

“Soon, the County will again be a significant force in artisan cheesemaking. Award-winning Fifth Town Artisan Cheese will resume production later this year under new ownership, and a newcomer, County Cheese Company, aims to start production this summer. Of course, Black River Cheese has been in business in the County since 1901.”

The Great Canadian Cheese Festival is a multi-faceted, two-day event that annually attracts thousands of consumers to meet, learn, taste and buy the best in artisan cheese and fine foods and sample fine wine, craft beer and crisp cider. Dairy Farmers of Canada is the lead sponsor, presenting seminars throughout the day in the All You Need Is Cheese® Annex.

The Artisan Cheese & Fine Food Fair features a Dairy Farm display for the enjoyment of young and old. Also on the program are Tutored Tastings where experts offer guidance on a variety of cheese topics.

The Cheese Festival also features a special Saturday evening social functions. Winners of the Canadian Cheese Grand Prix are on the menu as the cheese course at Gastronomy on the Farm with Jamie Kennedy.

Last year, close to 100 exhibitors and vendors and more than 3,000 consumers made the event the largest cheese show in Canada representing producers from coast to coast. One-third of the participating cheese producers come from Québec.